Ted Cruz has long sought to be the last anti-Trump candidate standing in the race for the GOP presidential nomination, and today he has virtually secured that title. So, can Ted Cruz succeed where others have failed in overcoming the New York City-based real estate mogul’s lead among GOP voters? Cruz’s biggest fans contend that the Texas senator would not just be the most effective anti-Trump but the Trump vanquisher. All that stands in his way, in fact, are other Republican presidential candidates, even those who long ago suspended their campaigns. That excuse for middling performances is no longer compelling.

John Kasich has taken the role formerly filled by Marco Rubio as the great spoiler in the minds of many Cruz fanatics. In Arizona, Ted Cruz lost to Donald Trump by 22 points with 47 percent of the vote to Cruz’s 24.9 percent. John Kasich secured just 10 percent and Rubio, who dropped out of the race a week earlier, won 18 percent. Many of those ballots were cast well before the Florida senator suspended his campaign, but even if neither Rubio nor Kasich were in the race, the notion that Trump would not have been able to secure a paltry 3 percent of the combined non-Cruz vote to win an outright majority in the Grand Canyon State defies logic.

Voters are not tactical automatons who carefully calculate which candidate will benefit most from their support, nor are they rigid ideologues or policy wonks. They cast their ballot for those candidates they like, and much of that verdict is determined by the individual candidates’ personalities. There isn’t much evidence that Cruz can win the votes he needs to deny the real estate heir the delegates he needs to win the nomination outright by simply vocalizing the undeniable fact that he is not Donald Trump.

A recent Quinnipiac University national survey found that Trump would earn the lion’s share of Kasich’s voters if the Ohio governor were to drop out of the race. Similarly, Trump would earn the backing of most Ted Cruz’s voters if the Texas senator were to call it quits. Since Rubio exited the race, national surveys (which admittedly don’t mean much, given the narrow terrain on which the rest of the primary campaign will be fought) have shown Trump consistently winning more than 40 percent of the GOP vote.

Ted Cruz outperformed his polls in Utah, and that bodes well for him ahead of the April 5th contest in Wisconsin. The outlook for his campaign is, however, much grimmer ahead of primaries in places like New York, New Jersey, Maryland, Connecticut, and Pennsylvania. The notion that Ted Cruz benefits most from a winnowing of the GOP field now, in the spring of 2016, is simply not supported by objective evidence. Not yet, at least.

That’s a problem for Cruz, and it is one of his own making. The Texan long ago made the strategic choice to alienate large segments of the Republican electorate by making sport of castigating his colleagues in Congress. Maybe he, like much of the conservative commentary class, thought that Republican elected officials were as unloved by their voters as the voices on the radio suggested. But these GOP politicians had the support of tens of thousands of constituents across the country. By calling them liars and suggesting that they were too eager to betray their party and their country for personal gain, Cruz was not only isolating himself from his colleagues in Congress but from his colleagues’ voters, too.

Today, with Cruz the very last viable conservative alternative to Trump left standing, that residual bitterness is melting away, if only out of necessity. That conciliation seems to be a harder pill for Republican primary voters to swallow than it has been for Cruz’s Republican colleagues in the Senate. It shouldn’t even need to be said, but that condition is not the result of stubbornness on the part of Republican primary voters. No politician is owed a vote; they must earn each and every one.

For Ted Cruz, who has made a career out of cultivating tribal affinity and intramural rancor within Republican ranks, magnanimity is a hard pivot. “Marco can paint a picture, can weave a tapestry of a promise of America, like nobody else. His presidential campaign inspired millions across the nation,” Cruz said on the night that the Florida senator exited the race. “I congratulate Marco on the tremendous campaign. To those who supported Marco, who worked so hard, we welcome you with open arms.” That’s lovely sentiment, but he has made no effort beyond this perfunctory nod to appeal to those voters who were attracted to Rubio or, for that matter, John Kasich. In fact, Cruz has continued to campaign as a slightly milder version of Donald Trump.

The Wall Street Journal editorial board observed, correctly, that Cruz made a campaign stop in Arizona ahead of that state’s primary where he attempted to “outflank” Trump on the issue of immigration, as though such a maneuver was even possible. The only news that Cruz has been able to make in the wake of the unnerving attacks on Brussels has been to contend that American police forces should begin virtually occupying American-Muslim neighborhoods; a counterproductive recommendation that is utterly unwarranted by any rational assessment of the threat or an understanding of effective counterterror tactics.

In making this recommendation, Cruz opened himself to a host of critiques from Democrats and the press, which will be rejected as knee-jerk displays of bias by those conservatives already friendly toward Cruz. But has he won a single new Republican voter? Within hours of Cruz’s news-making comments, the Texas senator was again one-upped by Trump who contended (without evidence, naturally) that American Muslims were actively shielding terror plotters in their midst from law enforcement. If Republican voters want Trumpian excess, why would they vote for a diluted version when they can have the real thing?

This leads to an observation that Cruz’s supporters will not like, but which is increasingly inescapable. Ted Cruz has repeatedly demonstrated that he is powerless to control the news cycle. Since the government shutdown, for which he is most well-known, Cruz has shown no facility for shifting the focus of the mainstream press onto more favorable ground. Rather, he seems content to play an antagonistic foil for Democrats, which suits the press’s purposes just fine. Even for much of the 2016 election cycle, Cruz has so far been incapable of creating a positive news cycle for himself. That will prove a crippling liability as the primary cycle enters into a slow, month-long phase in which only one state – Wisconsin – will vote.

For Republican voters who remain unconvinced that Donald Trump is a capable presidential nominee, resistance to the celebrity candidate from inside the Beltway – where Ted Cruz has made few friends – may prove heartening. But anti-Trump officeholders in Washington cannot push Cruz over the top. That will be his charge alone. Ted Cruz needs to demonstrate that he can win news cycles and convert Republican moderates. So far, there has been little evidence that the candidate is capable of making his campaign’s case to the yet unconverted. 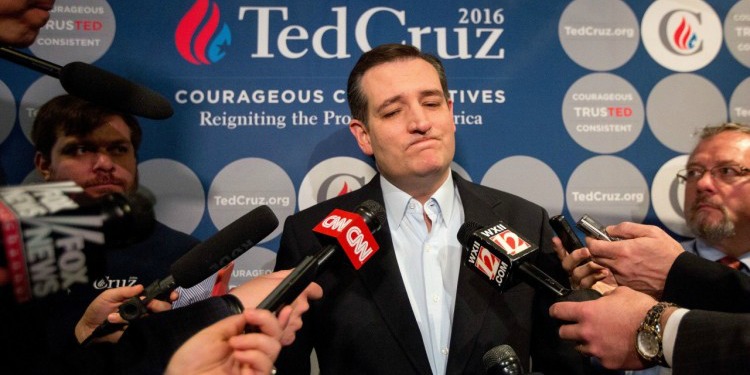